Tracey Lauriault (my co-founder of datalibre.ca, and the tireless editor of) and I have a chapter in a just-released book out of the University of Sydney Press: Access to Public Sector Information : Law, Technology and Policy, edited by Brian Fitzgerald. Ours is chapter 14 in Volume 1: “Data Access in Canada: civicaccess.ca.” 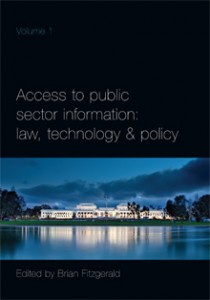 On the back of the growing capacity of networked digital information technologies to process and visualise large amounts of information in a timely, efficient and user-driven manner we have seen an increasing demand for better access to and re-use of public sector information (PSI). The story is not a new one. Share knowledge and together we can do great things; limit access and we reduce the potential for opportunity.

The two volumes of this book seek to explain and analyse this global shift in the way we manage public sector information. In doing so they collect and present papers, reports and submissions on the topic by the leading authors and institutions from across the world. These in turn provide people tasked with mapping out and implementing information policy with reference material and practical guidance.

A free online version should be accessible shortly.

I can’t recall where I found this, but it’s very very cool:

From Information Is Beautiful: Infographic on various billions spent, or planned, or earned:

The Open Dinosaur Project was founded to involve scientists and the public alike in developing a comprehensive database of dinosaur limb bone measurements, to investigate questions of dinosaur function and evolution. We have three major goals:1) do good science; 2) do this science in the most open way possible; and 3) allow anyone who is interested to participate. And by anyone, we mean anyone! We do not care about your education, geographic location, age, or previous background with paleontology. The only requirement for joining us is that you share the goals of our project and are willing to help out in the efforts.

Want to sign up? Email project head Andy Farke (andrew.farke@gmail.com), and welcome aboard!

For the price of a beer (or a pitcher, or a round), you can support VisibleGovernment.ca … the non-profit that promotes online tools for government transparency, openness and accessibility around government and civic data (yay!).

They’ve got a little fundraiser going, in celebration of Canada Day: Beers for Canada …

How we’ll spend your money

We work on several aspects of transparency:

Creating new tools: We work with developers and designers to build websites that encourage citizens and governments to communicate openly.
Encouraging government openness: We show elected officials the benefits of open, two-way discourse, highlighting places where information is lacking and celebrating the efforts of those who want to be more transparent.
Public awareness: We emphasize the civic importance of transparency and open government.
Working with other organizations: We share and collaborate with organizations like the Sunlight Foundation, MySociety and Changecamp.

So, go support a worthy cause.

After a long hiatus due to a wordpress hack, datalibre is back up and running. I did a full reinstall of wp, a full update of the theme files, and put in most of the customization (I think).

So we’re back to agitating for data freedom in Canada, to whit:

datalibre.ca is a group blog, inspired by civicaccess.ca, which believes all levels of Canadian governments should make civic information and data accessible at no cost in open formats to their citizens. The data is collected using Canadian tax-payer funds, and we believe use of the data should not be restricted to those who can afford the exorbitant fees.

sell your US bank stocks

when everyone knows everything

As GPS transceivers become common accessories in cars, the benefits have been manifold. Millions of us have been relieved of the nuisance of getting lost or, even worse, the shame of having to ask a passerby for directions.

But, as with all popular technologies, those dashboard maps are having some unintended consequences. In many cases, the shortest route between two points turns out to run through once-quiet neighborhoods and formerly out-of-the-way hamlets.

Villages have been overrun by cars and lorries whose drivers robotically follow the instructions dispensed by their satellite navigation systems. The International Herald Tribune reports (tinyurl.com/24zcyg) that the parish council of Barrow Gurney has even requested, fruitlessly, that the town be erased from the maps used by the makers of navigation devices.

Hard-core surfers are finding their private waves are getting invaded by hordes, who have been following surfcams streaming live on the web.

At the same time, though, transparency is erasing the advantages that once went to the intrepid, the dogged and the resourceful. The surfer who through pluck and persistence found the perfect wave off an undiscovered stretch of beach is being elbowed out by the lazy masses who can discover the same wave with just a few mouse clicks. The commuter who pored over printed maps to find a shortcut to work finds herself stuck in a jam with the GPS-enabled multitudes.

You have to wonder whether, as what was once opaque is made transparent, the bolder among us will lose the incentive to strike out for undiscovered territory. What’s the point when every secret becomes, in a real-time instant, common knowledge?

So, I ask Facebook and Mark Zuckerberg and co.: Why don’t you let users leave Facebook when they want to? Why are you so much more adamant about holding on to our data than any other social network? What, exactly, are you trying to hide?

I agree wholeheartedly with Steve, though as a guy with a URL that is: hughmcguire.net, who writes regularly about most of what you need to know about me if you were the secret police, I wonder how we digital privacy advocates will fare when the boots start stomping. Even if I decide to delete everything, you could still go visit the wayback machine to see what I had to say.

So, really, participating in the digital world is probably enough to let em look up your skirt as much as they like. Facebook just makes the modelling easier. Much easier.

I just went to facebook – most everything in my account is deleted, except for my friends, which probably is enough to make a very good computer model about where I am likely to hide when they come after me.

Oh, and, strangely, a previous post of mine about Steve & Facebook continues to get comments on a regular basis.

[PS, on a design note, the traces left in my eyeballs from trying to read steve’s bold-glowing-white-on-black-with-red site are still visible, three minutes later, as I write this on my white wp interface … ah… there…. gone now. Phew.]